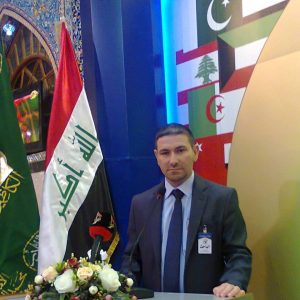 Speech of the Dean of the College

In the name of of Allah the Merciful
Praise be to God, Lord of the Worlds, and prayers and peace be upon our Prophet Muhammad, the God of the good, and his ignorant companions.
God Almighty said: In the name of God, the Most Gracious, the Most Merciful ((God will raise those among you who have believed and those who were given knowledge by degrees)).
The College of Education for Human Sciences is the first nucleus of the University of Dhi Qar, as the college was founded and attached to the University of Basra, and teaching began there in the academic year 1993-1994, and it included three departments: Arabic, English, and History. After the establishment of Dhi Qar University in 2002, the College was formed With the faculties of arts and sciences, the basic building block for the launch of the first university in the governorate..
Only a few years passed until the college started to open evening studies in it, in addition to opening other scientific departments such as geography, educational and psychological sciences.

To complement the requirements of the governorate’s need for advanced scientific cadres, the college has begun to open many specializations in postgraduate studies. Today, it includes a doctoral study for the Arabic language specialization in the two branches of language and literature, as well as a master’s study in the specializations of the Arabic language in the aforementioned two languages, the English language, and educational and psychological sciences, and it was recently approved to open A doctoral study in modern and contemporary history, as well as two master’s studies in geography and Islamic history.

Today, the college includes more than three thousand students in the morning and evening studies, in addition to about three hundred postgraduate students who study in its various departments. Teaching and supervising students is practiced by an educational cadre of masters and doctorate degrees and with different scientific titles. Professors and assistant professors constitute more than a proportion of more than 75% of them. This is supplemented by a staff comprising seventy-eight employees and technicians and from various specializations and scientific certificates.

The college has been providing state departments in the governorate and abroad with specialized scientific cadres who hold bachelor’s, master’s and doctoral degrees with the available specializations, and almost no department of the governorate is left without graduates of this college who have taken their leading role in the labor market.
The college looks forward to openness and the introduction of modern systems into its educational programs. It has shared the other colleges in the university in applying e-learning, and its professors and students have been involved in this field.

Today, the college continues with its programs and main objectives represented in preparing teaching and educational cadres that take upon themselves the task of promoting the promising generation through which it is possible to advance the precious Iraq socially, economically, politically and in all other various fields.
Our constant prayer is that God Almighty preserves our dear college with its cadres and students, our dear university and our generous country with its protection.

We're not around right now. But you can send us an email and we'll get back to you, asap.